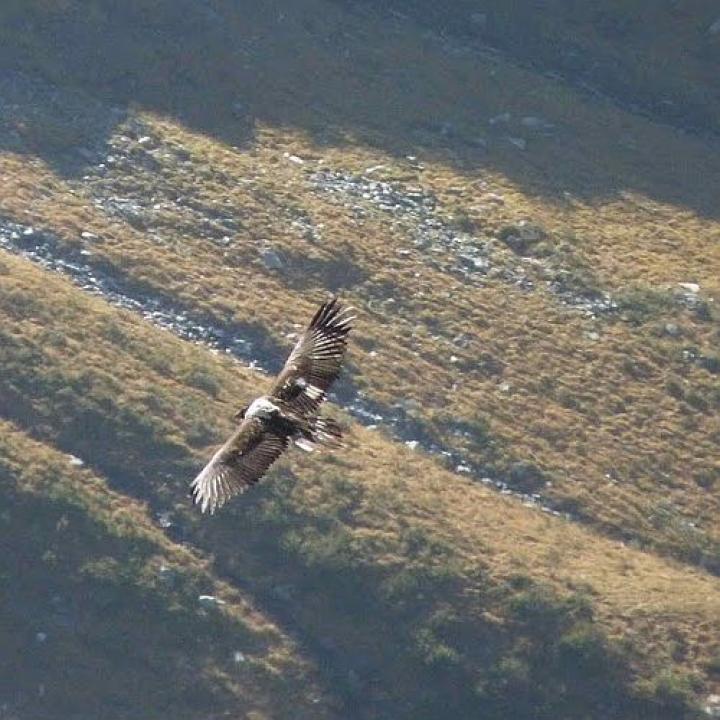 The sunshine on 10th October tempted many people into the wonderful, mountainous world of the Sarganserland. Björn Antelmann and his family were also out hiking. Above the Schottensee, near to Pizol (SG), the family were suddenly surprised by Kira who was calmly and slowly flying over the hikers. Björn Antelmann was able to capture two impressive photos, which show the young female in a particularly beautiful autumn light. On the same day, about 20km further to the north east, there was a second, impressive meeting with Kira. Christopf Zwicky, an experienced climber, was taken aback as he reached the top of Mürtschenstocks (GL) through a gap in the rock: only 5 metres away from him a Bearded Vulture took off. It was the young Kira, who then circled the summit a few times inquisitively.

The satellite data also gives away the fact that Kira spent most of October in the Sarganserland. Later on, the young female found her way to the Cantons Schwyz, Uri, Ob- and Nidwalden. We are very happy that Kira, Sardona and Ingenius have accustomed to the life in the wild so well and that the young Bearded Vultures feel at home in the Central Alps. Hopefully this means that these fascinating Alpine inhabitants will be met more often in the future.