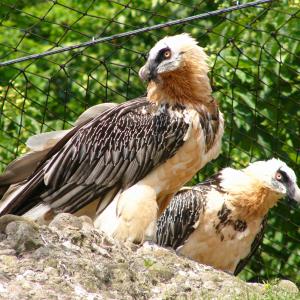 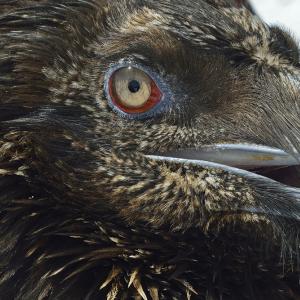 A brief profile of the Bearded Vulture (Gypaetus Gypaetus)

The Bearded Vulture - an exceptional bird of prey

The Bearded Vulture is the only vulture that has specialized in the processing bones of dead animals. This special diet requires many adaptations and therefore the Bearded Vulture differs to other vulture species in many aspects. 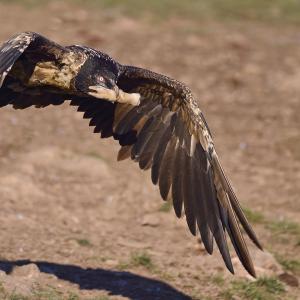 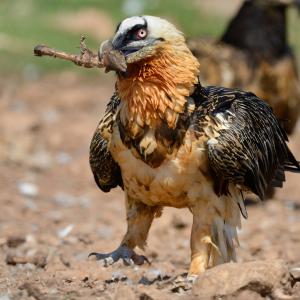 A Vulture with a beard

The Bearded Vulture has many names. In several languages , his name refers to his diet. So it for example is called "Boanbrüchl" in Tirol and "Quebrantahuesos" in Spain, which means bone crusher. In English, the term "Lammergeyer" is used often. In the German-speaking countries “Lämmergeier” was a common name for a long time because it was mistakenly assumed that Bearded Vultures prey on lambs. Thanks to educational work, this misconception has been removed and now the name Bearded Vulture has prevailed. The name refers to the dark, bristling beard, which is characteristic for this vulture and adorns the head of both females and males. The purpose of the beard is not yet clear. 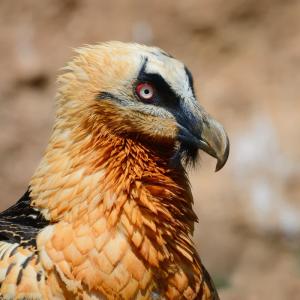 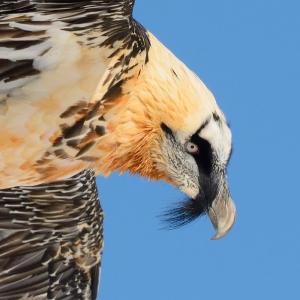 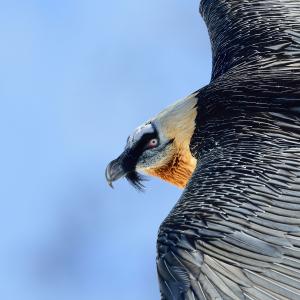 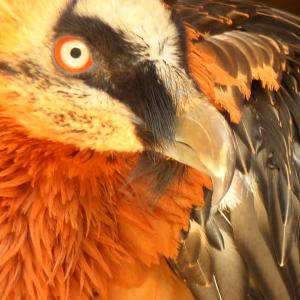 When searching for food Bearded Vultures often have to travel long distances. Thanks to their large wingspan, vultures are very hardy gliders. With a wingspan of approximately 2.6 to 2.9 meters and a weight of five to seven kilos Bearded Vultures are the largest breeding bird of the Alps. Bearded Vultures prefer open, mountainous landscapes. Here they use the updrafts that occur along the mountain slopes whilst hunting to make the search for the remains of dead animals easier. Because Bearded Vultures use their eyes for hunting, they often fly at low altitudes. Thus, there are often surprising encounters between humans and these great gliders. 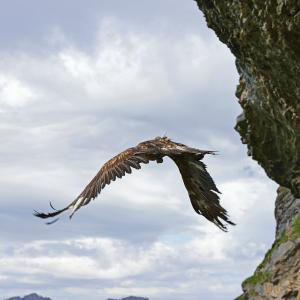 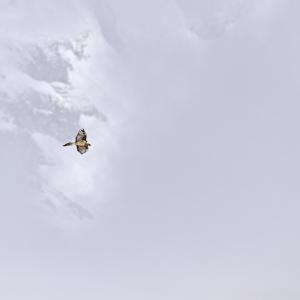 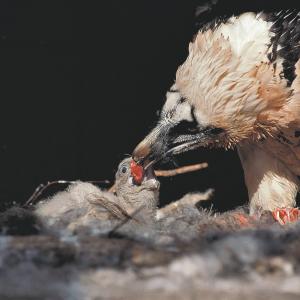 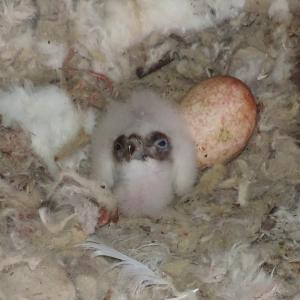 An egg for emergencies

Although Bearded Vulture can raise only one chick per year, they usually lay two eggs. The two eggs are laid with the difference of approximately one week, with the result that the two young birds hatch at different times and have different sizes. Young Bearded Vultures are very aggressive and the competitive situation in the nest causes the stronger chick to harass the weaker chick in the first days of life and keep it away from food until this dies.

Based on the Bible story of Cain slaying his brother Abel, in the Old Testament, this mechanism is called "Cainism". The biological reason is that hunting is very costly for the parents, and there is only enough food for one chick. The second egg is the biological reserve, in the event that the first egg is not fertilized, the embryo dies in the egg or the chick does not survive the first few days.

In the Alps the Bearded Vulture starts with the brood between late December and late February. This somewhat special time is related to the diet of the chicks. They can’t digest bone and rely on fresh muscle meat in the first weeks of life. The incubation period lasts approximately 55 days with Bearded Vultures. Thus, the chicks hatch in late winter, when there are sufficient carcasses of animals, which did not survive the harshness of the season, and thus the Bearded Vulture parents can provide enough fresh meat their young. 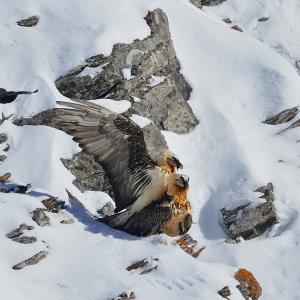 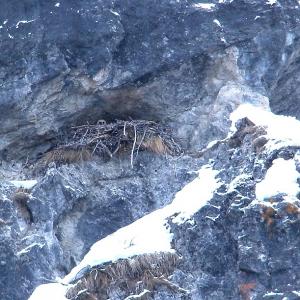 Bearded Vultures are of remarkably beautiful colour. The eyes lighten up bright red when something arouses their curiosity or they are excited (more >>). During adolescence their feathers still have a predominantly dark brown colour. From the age of four years, the head, chest and abdominal feathers turn increasingly white. As part of this change, an interesting behaviour becomes important: Both sexes search for specific bodies of water that contain iron oxide in their sediment. Through extensive bathing in these puddles, the breast feathers especially are dyed bright orange-red. Whether this behaviour serves as adornment or whether the iron oxides protect the egg from infections during the breeding, is controversial. Perhaps both explanations can be used, or there are other, unknown reasons. 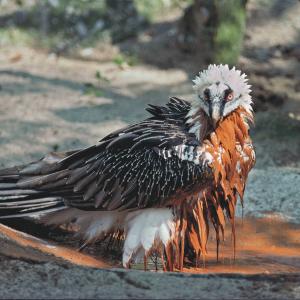 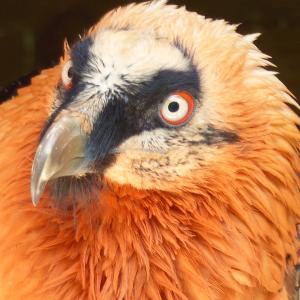 The Bearded Vulture and its relations

Worldwide, there are 23 species of vulture. A distinction is made between New World- and Old World vultures. The former inhabit the American continent, the latter Eurasia. The seven New World vultures are more closely related to storks than to Old World vultures, and have also become scavengers in the course of evolution. Of the 16 vulture species in Eurasia 4 species live in Europe, the Vulture Conservation Foundation works to ensure their protection.

The common European vulture is the Griffon Vulture, which can mainly be observed in Spain and southern France. Young Griffon Vultures appear regularly in the Alps. Furthermore, the Black Vulture, the largest European vulture of 7 up to 12 kg, and the very rare, Egyptian Vulture appear in Europe. Egyptian Vultures feed off small carcasses, faeces and even ostrich eggs, which they can crack with stones, among other things. Presumably, Egyptian and Bearded Vultures split with the other Old World vultures early in the history of their kind. 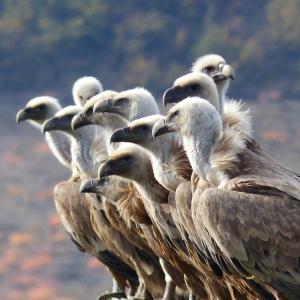 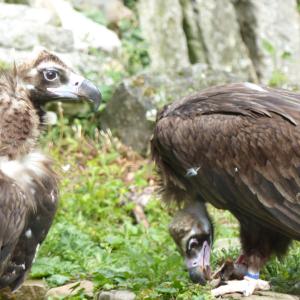 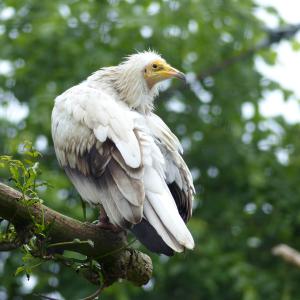 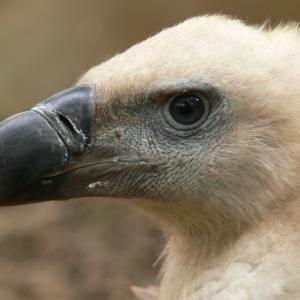 Bearded Vultures have a large distribution area. They were originally native to almost all mountains in Eurasia. Even today strong stocks live in the Himalayas and Central Asia. There is even a separate subspecies that lives in the mountains of eastern and southern Africa. Globally, vulture stocks are decreasing dramatically in many regions. This also applies to the Bearded Vulture. Particularly in the Mediterranean, Bearded Vultures are at great risk. The Bearded Vulture Reintroduction Project in the Alps is, therefore, very important 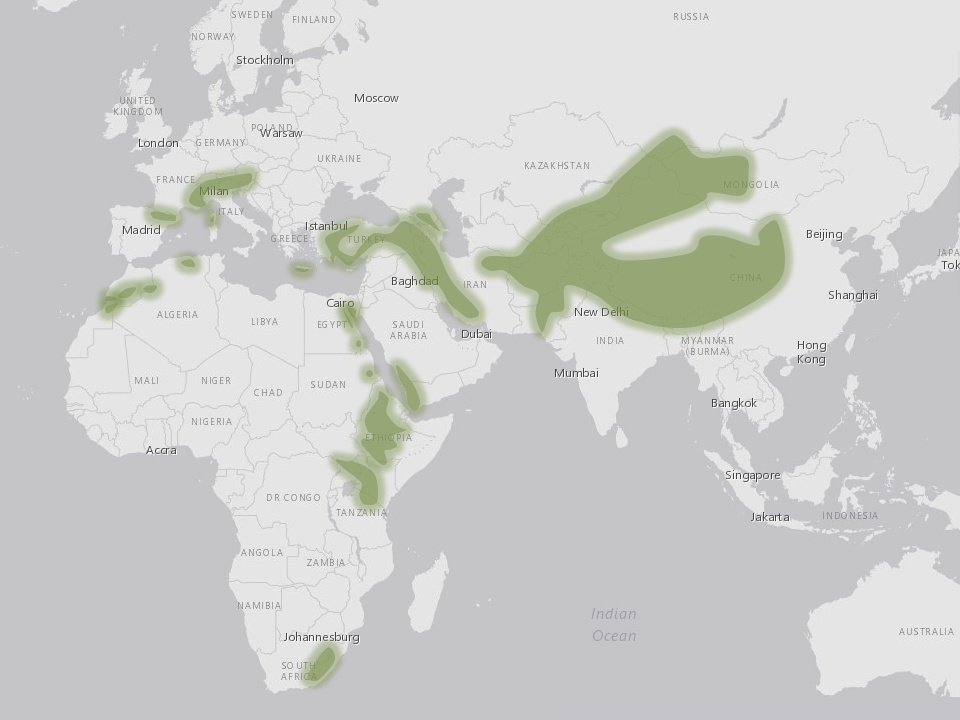