Detect, observe, report. You can help!

With some knowledge, Bearded Vultures can be easily spotted in the field. Often it is even possible to distinguish whether it is a young or already sexually mature bearded vulture. Report your observations and help the reintroduction project.

Memorize well how you can recognize a flying Bearded Vulture. Note the long, pointed wings and the long, spatula-shaped tail (see series of pictures below). These characteristics are particularly pronounced in adult Bearded Vultures, which are characterised by their white body and head plumage.

In contrast, Golden Eagles have shorter and fan-shaped tail feathers. Their wings are wider and have a white patch in the middle of each wing - not to be confused with the marked feathers of the young, Bearded Vultures, which are always bleached at the edge of the wing or at the outer end of the tail feathers. 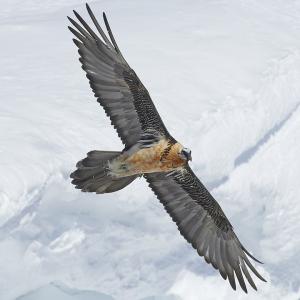 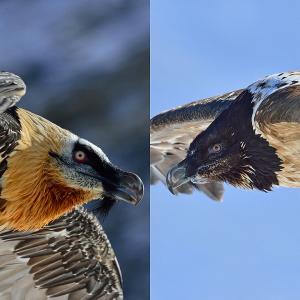 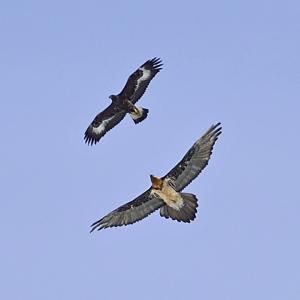 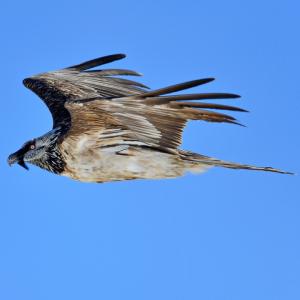 There is also a risk of confusion with Griffon Vultures. These differ in flight from Bearded Vultures by their broad wings, which are held up in a clearly V-shaped manner. Griffon Vultures have a short, rather straight cut tail and also occur in large groups. When sitting, they can be recognized by their long neck with collar and the few feathers on their head. 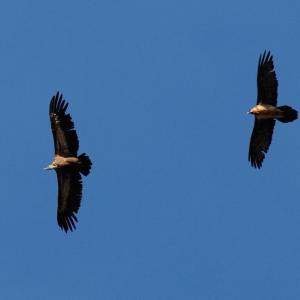 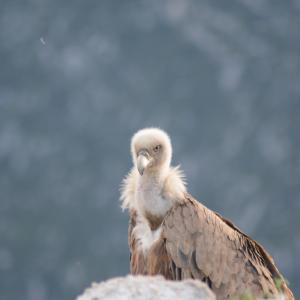 Although ravens have a similar tail shape to the bearded vulture, they are much smaller and can be seen from a distance due to their faster movements.

The plumage reveals the age of the Bearded Vulture

With a little practice you can even estimate the age of bearded vultures because of the plumage colouring and moulting pattern. Here you can find detailed information: Age estimation Bearded Vulture.

The best chance is to find out when the next young Bearded Vultures will be released into the wild in your region. After release at the end of May or the beginning of June, the young vultures that are not yet able to fly usually spend two to three weeks in the release niche before they take off for their first flight at the age of about 120 days. The first flight rounds are usually very short and last hardly two or three minutes. Then the young vultures begin to extend their flights from week to week. Even in July and August they spend most of their time in the immediate vicinity of the release site. If you visit a release site during this time, there is a good chance of encountering a Bearded Vulture. Find out in spring at the release sites when and where the next release will take place.

If you were lucky enough to observe a Bearded Vulture, let us know! By doing so, you will actively contribute to the success of the reintroduction project. With a bit of luck we will be able to tell you which individual you have seen and with this information we receive basic data on the survival of the Bearded Vultures that have been released into the wild.

Here you can go directly to our observation form>>