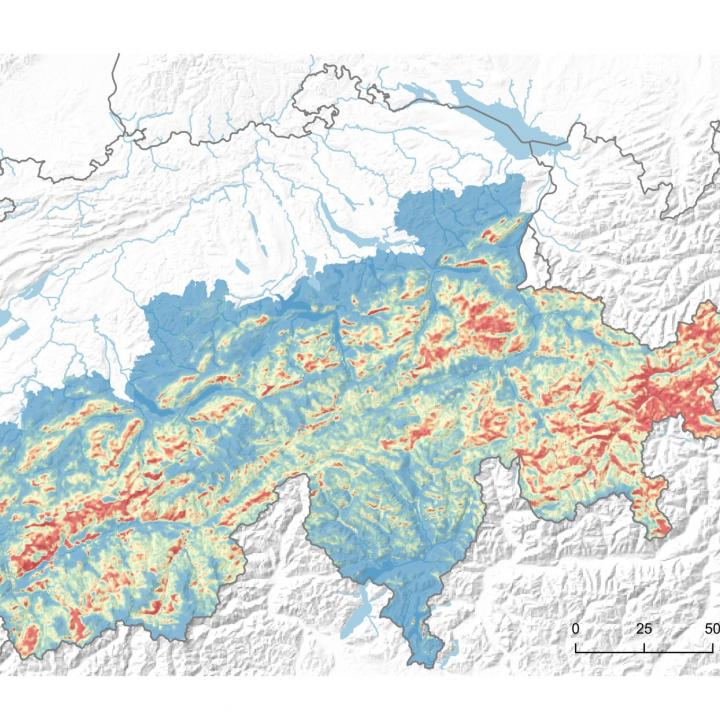 Which habitats are particularly suitable for Bearded Vultures? This question has been investigated by Sergio Vignali as part of a research project at the University of Bern (Dept. Conservation Biology>>). In addition to a fundamental interest in this question, there is also a concrete conservation concern behind this work, which was done in close collaboration with the Pro Bearded Vulture Foundation.

The use of wind energy continues to gain importance. Increasingly, sites for wind turbines are also being assessed in the Alpine region.

The bearded vulture is a resident of the Alps. It is a persistent glider and often uses upslope winds for its forays in the mountains. Because it usually flies at relatively low altitudes above the relief, there is a significant risk that it will collide with rotor blades of wind turbines if they are planned in unsuitable locations.

The low reproductive rate of this species implies a particularly high survival rate. If new mortality risks are added, this can  quickly cause the currently positive population trend to deteriorate again.

To reduce negative impacts of infrastructure projects on sensitive and endangered species, construction bans are usually enacted within buffer zones around nesting sites.

This approach neglects the distributional dynamics of species and therefore does not provide adequate protection. After all, species that return naturally or are actively reintroduced in programs are at the beginning of their dispersal and depend on habitats that are as undisturbed as possible.

40% of the alpine space suitable for bearded vultures

There are currently 22 breeding pairs living in Switzerland. There are still many regions in the Alpine region where bearded vultures can establish themselves. Therefore, when clarifying the location of wind turbines, it must be estimated in advance to what extent these areas will be used by bearded vultures in the future

For this purpose, predictive distribution models for the bearded vulture in Switzerland have been developed. They are based on a combination of random observations and GPS positions of individuals marked with transmitters. The models show that 40 percent of the Alpine region is suitable habitat for bearded vultures.

It is clear from the habitat models that other environmental factors are particularly significant in winter and summer, and old and young animals also do not have identical habitat requirements.

Generally, good occurrences of ibex and chamois seem to be important for the presence of bearded vultures. Limestone and granite are valued over gneiss as substrate. Old birds particularly like places where there is a lot of sunshine in winter and little rain is to be expected.

Thanks to a better understanding of the habitat requirements of bearded vultures, it is now possible to create maps that show areas with particularly high conflict potential that should not be used for wind turbines. Further site analyses are then only necessary in areas where significant conflicts are not to be expected from the outset.

* In order to get a broader picture the research group of the Univ. Bern is now also working on a corresponding model for eagles.