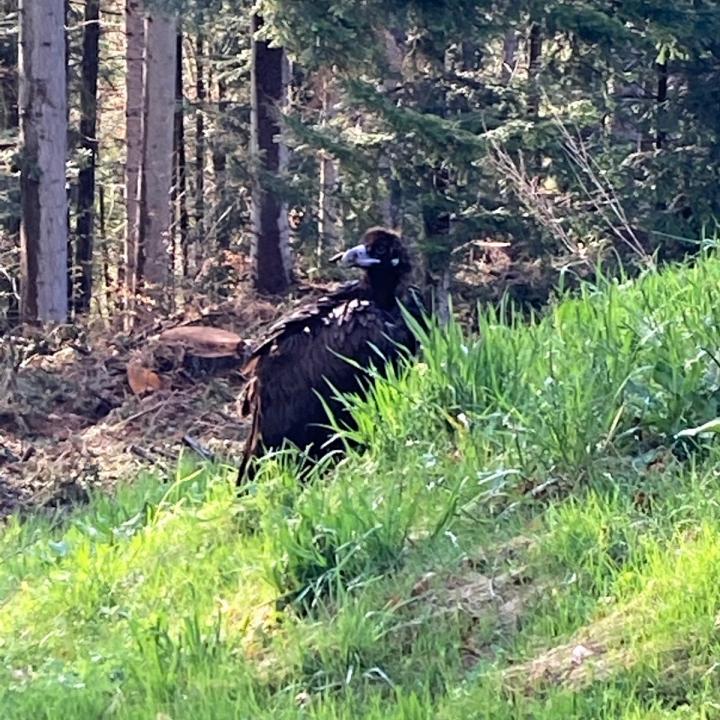 In the canton of Schwyz, a severely weakened Cinerous vulture was found. The starved animal died shortly after being recaptured. The autopsy showed that the rare animal on its journey through the Alps with the food plastic waste has taken up and then starved to death. The case shows how important it is not to leave plastic waste outdoors.

Here is the detailed report on this sad incident by our Graubünden regional coordinator David Jenny:

Plastic: an underestimated danger for wildlife

Plastic is not directly toxic, but nevertheless pollutes our environment more and more. This plastic is practically non-degradable and is found in incredible quantities almost everywhere. Microplastics have even been detected in the Arctic or even recently in Lake Lunghin, 2500 m above Maloja.

Somewhat less well known is the fact that wildlife is increasingly suffering from the presence of plastic waste in the environment. More than 6 million tons of plastic accumulate in the world's oceans every year, which also ends up in the stomachs of marine animals. This repeatedly has deadly consequences for seabirds, turtles, seals or whales.

That the problem is not limited to coastal areas is shown by the increasing number of wild animals with larger amounts of plastic in their stomachs in our latitudes as well. In 2019, the case of a deer near Arosa, in whose stomach 6 kg of plastic waste was found, reached the press. Large birds such as the white stork are also particularly affected. In an investigation of storks found dead in Switzerland, more than a third of the young storks had plastic in their stomachs.

Now another sad case recently occurred in the canton of Schwyz, where a particularly rare bird died from an overdose of plastic waste.

A Cinerous vulture from Verdon

Cinerous vultures are the largest representatives in the vulture family, they can reach a wingspan of 2.9 m, weigh 12 kg and belong to the very rare vulture species (in central Switzerland there were just three sightings of this species in 2021). Similar to bearded vultures, they have been reintroduced to the Alps in an elaborate project. Five pairs of this species currently live in the French Maritime Alps. Three pairs had raised a young bird in 2020. These were ringed while still in the nest by a team from the southern French bird conservation organization LPO Provence Alpes Côte d'Azur. One of these young Cinerous Vultures received its ring in the Verdon Gorge in Provence on June 30, 2020. Until April 9, 2021, it was still observed in its parental territory during the so-called begging flight, after which its trail was lost in France.

He then appeared a month later 400 km further northeast in the canton of Schwyz, unfortunately in poor condition. On May 7, a local resident reported the enormously large bird at the settlement of Egg above Sattel, strolling around. The responsible gamekeeper Markus Raschle was able to catch the obviously weakened bird and brought it to Steve Diethelm in Siebnen, who runs a bird of prey care station there. He tried to feed the apathetic vulture in the evening, but found it dead in the aviary the next morning.  He weighed only just four kilograms, consisted practically only of skin and bones and was probably starved to death.

For examination, he arrived on 16 June 2021 at the Office of Hunting and Fishing Grisons in Chur, where routinely dead found birds of prey are analyzed. The autopsy of the carcass then provided information about the cause of death: the stomach of the black vulture was bulging with plastic waste. It was numerous plastic strings, as they are used to close garbage bags and parts of garbage bags. Obviously, with this load of plastic in the stomach, digestion was blocked and the rare vulture miserably starved to death.

Where and why the Cinerous vulture picked up the supposed food remains open. But it shows us how important it is not to leave any plastic waste outdoors and to consider the needs and habits of wildlife in our handling of waste. 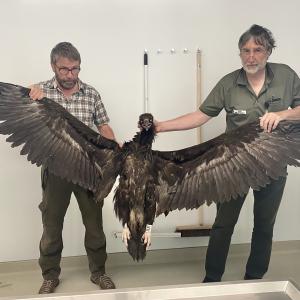 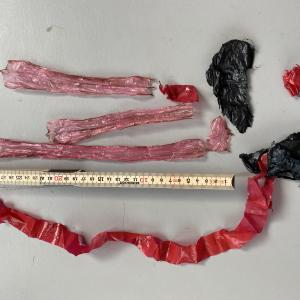