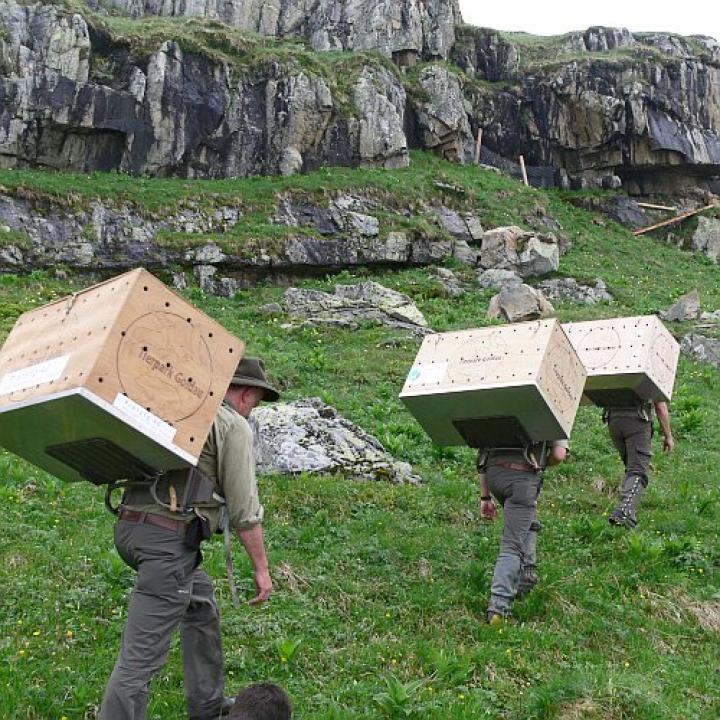 he 13th June was a big day for the reintroduction project: for the first time, young Bearded Vultures have been released into the wild in the northern Swiss Alps. Many interested Bearded Vulture fans came to the Calfeisental to experience the release of the young Bearded Vultures Ingenius, Sardona and Kira  (video of the release). Even after a tiring journey, the curious Ingenius went on an exploratory tour on the first day. He quickly discovered the water bath and tried it out, thoroughly, straight away.

Neither the cold nor the snow seemed to bother our Spanish Bearded Vulture. Thus he sat on a crag, unprotected in the bountiful snow and observed the activity in the Calfeisental.
Ingenius seems to have a peaceful character. He prefers to avoid any conflict with Kira and Sardona. When Kira, rather presumptuously, showed an interest in his food on 26th June it became too much for Ingenius and so, at the age of 113 days, he set off for his first flight. The flight only lasted 30 seconds but was a great success and even the landing into long grass worked out perfectly.