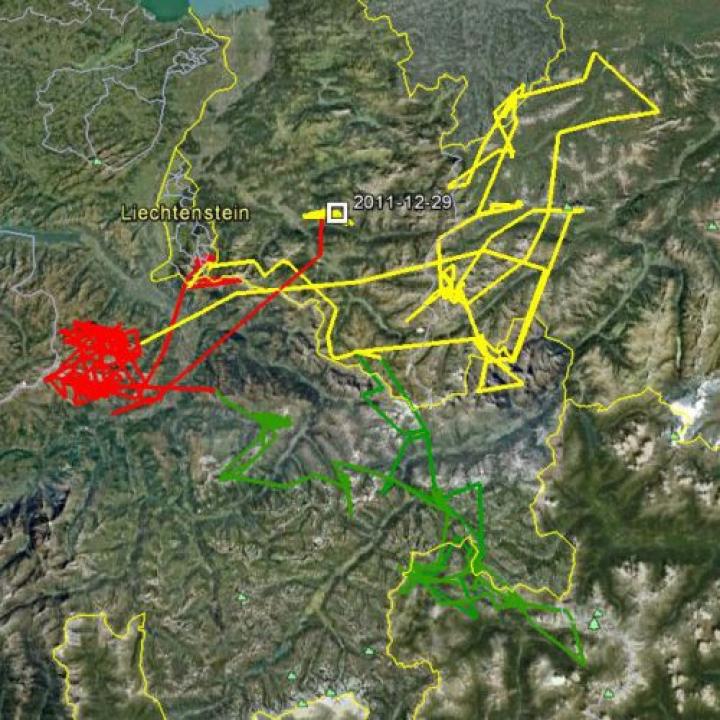 Of all the three young birds released last year, Ingenius is still the bird who enjoys travelling the most. In the last months he spent some time in the Tirol and in Vorarlberg (marked yellow on map) and also made a lengthy break in the Swiss National Park and the neighbouring Stilfserjoch National Park (marked green on the map). It is good to see that he also returns regularly to his home and spent time near Flims and also the in the area of the Graue Hörner (marked red on the map). Near Seewis in the Prättigau, Ingenius was spotted by Rico Stecher

It is not only Ingenius who is drawn to the Sarganserland, again and again other Bearded Vultures from other regions are coming into the area. Matthias Meyer was able to photograph an adult Bearded Vulture on 20th November in Calanda near Chur. Also, the sighting of at least two different Bearded Vultures, born in the wild, was reported many times from the Calfeisental. And, near Seewis the Prättigau, only 20 km away from the release site, Kurt Gansner was able to photograph two young Bearded Vultures who have been born in the wild.The area of release seems to be successful and it would seem that “our Sarganserland Vultures” are attracting their fellows.