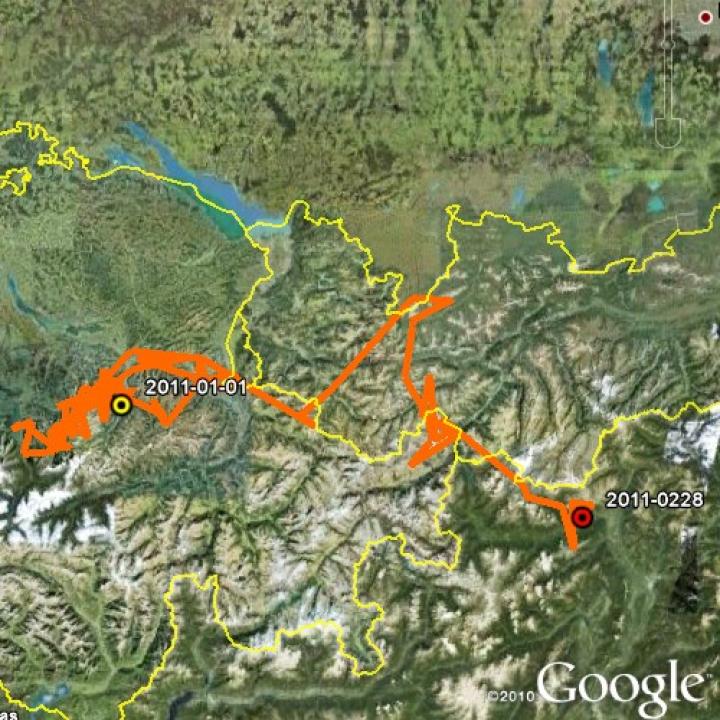 Never before has it been possible to follow the tours of a young Bearded Vulture in quite so much detail. The lengthening days of Spring obviously improved the electricity supply of Ingenius’ solar transmitter. Thus, it was possible to follow his adventures in minute detail with up to 24 localisations per day. This showed that the young male has a great desire to explore. In March Ingenius swept past the mountains of the South Tyrol, Tyrol, Allgäu (S. Germany), Vorarlberg (Austria) and parts of the Swiss Grisons (see orange line).

In April Ingenius spread his radius further and set off in an easterly direction as far as Pinzgau (Austria) and to the west to the Bernese Oberland (Switzerland) (see green line). During this period, on the 7th April, Mario Prinz spotted the wandering bird near to Samnaun. Ingenius landed on a snowfield, swallowed a few pieces of bone and then demonstrated some airborne acrobatics in the Spring sunshine.

At the beginning of May Ingenius returned home to Sarganserland. However, on the 6th May he was already ready to move on. From Sarganserland he went to Montreux, where Ingenius swivelled into the Valais and paid a visit to the Bearded Vultures in Val Derborance. This journey was achieved in record time of only six hours. This tour was completed by Ingenius with a short detour that took him close to Grenoble (see white line).