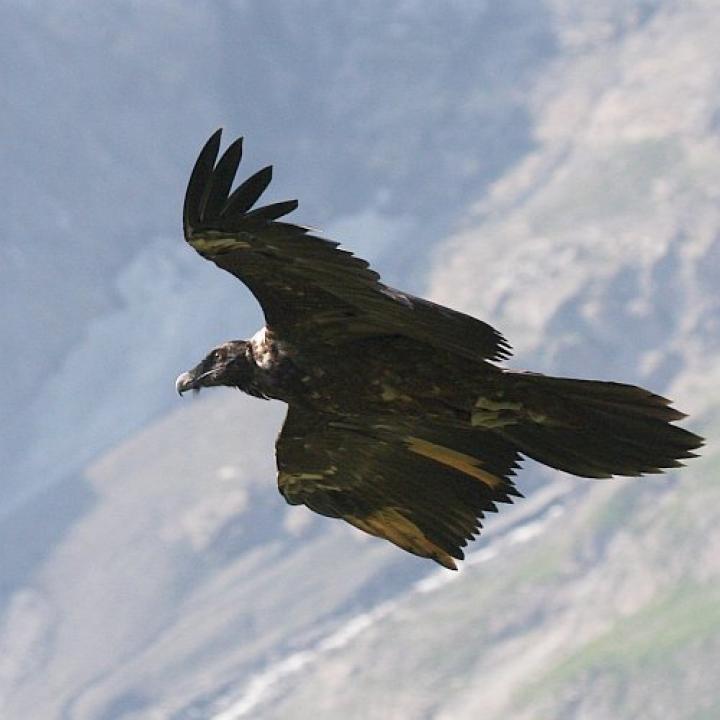 The young Bearded Vultures in the Calfeisental are now old enough to find their food by themselves. Nevertheless, Ingenius was still to be found in the Sarganserland at the beginning of September. It was a pleasure for us, that many people who were hiking in this mountainous region were able to experience impressive meetings with the young vultures. Amongst these were two observations from which we received pictures. On the 4th September Jrmgard Steiner spotted Ingenius on the Krete, which is between the Calfeisen and the Weisstannen valleys and, one day later the young man was spotted by Andreia Koller and Manfred Schmucki near to the release point

From a technical point of view, Ingenius has also given us pleasure. His solar transmitter, which is a prototype, regularly delivers precise GPS localisations. Thus, we are able to get a good picture of Ingenius’ tours. The first big excursion was started by Ingenius on the 11th September: at around 11.00 he was still in the release area. However, by 13.00 he was already north of Landquart and flew up the Prättigau until he was nearly in Klosters. On the next day he flew back and arrived in the Calfeisental in the afternoon. Then, on 21st September, Ingenius took off for the second time. This time he headed west, past the Tödi to the Urnerland and to Engelberg, where the young vulture spent the 22nd September. On the next day he moved on to the region of the Grimsel Pass. At the end of September the young, wandering bird was circling about the Titlis