As was seen shortly after the release, of the young birds in the Calfeisental Madagaskar is the one who most enjoys flying. Thus, Madagaskar is the only one of three “Calfeisen” young birds of this year who has already flown towards the east to the Tirol and southerly to the Tessin. And this is surely the reason why Franziska Lörcher managed to capture Madagaskar as he glided in free flight.

Mainly, however, Madagaskar, who was last photographed by Markus Bissig near the Klöntal Lake in Canton Glarus, spent most of his time in the region of his release where he is still profiting from the rich choice of food. Because of this, we can be sure that Madagaskar will get enough food, even when the heavy snow fall comes. 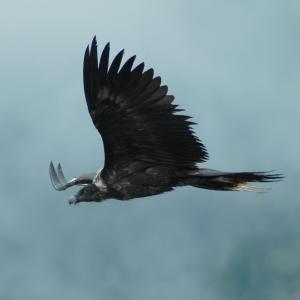