It is only the second breeding season for Marie Antoinette and Josef, a pair living in the Breeding Centre Haute Savoie. Marie Antoinette was released into the wild in the Haute Savoie in 1989 and had already reared three young birds in the wild. However, after a collision with a cable left her so badly injured that she could no longer fly, she was re-captured in 2004. But even in the French breeding centre, she is taking care of off-spring. On 15th February 2012 the chick called Gallus was hatched. Right from the start she was lovingly fed by the older birds (Youtube-Film) until she was older and could deal with pieces of meat on her own. And soon Gallus started to practice flying (Youtube-Film). It will be interesting to see how quickly the young bird takes off for the first time in the Calfeisental. 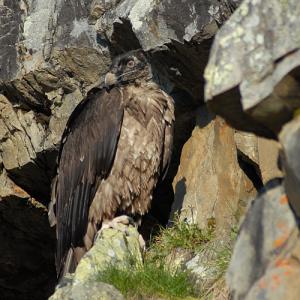