In October Bernd was generally to be found in the region surrounding the reintroduction niche in Glarus and in the Alpstein area. Here the young female Bearded Vulture was repeatedly observed and photographed. One particular image has also sent us Hansruedi Sydler who observed Bernd when she was circling the transmission tower from Santis. In early November Bernd then moved south. Firstly over Bellinzona and then she went into the Trentino in the province of Sondrio.

For over a week we had heard nothing from Bernd, when on 29th October, a "mortality signal" from the GPS transmitter reached us! This warning means that Bernd had not moved in the last 24 hours. We immediately made contact with colleagues in the province of Sondrio and the Stelvio National Park to search locally for Bernd. Despite the great effort of our colleagues it was impossible to go to the last known position of Bernd because of heavy snow and difficult terrain. Accordingly, it was with great relief then that evening when new GPS positions arrived and showed that Bernd had flown about 30 km. It seems that it is the young female Bearded Vulture was well and she was only temporarily blocked due to the weather. 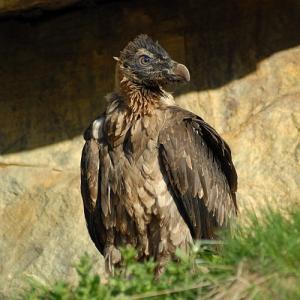